This Han dynasty treasure still retains the overall horn shape with curled terminals of its pre historic drinking horn antecedents,  but the style is more like the much nearer in time Achaemenid and Hellenistic Central Asian relatives with animal head termini or protomes.

Compare size of Edwards&Bishop rhyton with the famous Nanyue W. Han dynasty rhyton in Guangzhou at 18.4cm. and the Han dynasty rhyton  (also referred to as ‘Cup, Han dynasty’) in the National Palace Museum, Taipei at H. 18.1 cm.; both almost 5 cm. less in height.  (See ‘Description’ below for pictures of comparable rhytons and further discussion, and don’t miss video at top).   Description, notes and video continue below.  Please scroll down

Categories: All Jades, Masterpieces, Rhyta, Vessels Tag: (To enlarge for full-screen; press magnifying glass on the upper left corner of the image)

The uniquely stylized elephant head protome incorporates deeply incised eyes over a split trunk with a single tusk defined on one side.  It  is the very creative Chinese answer to an Achaemenid or Sassanian animal head.  This stylized elephant head has a bifurcated trunk, with the two divided parts curling inward parallel to each other instead of a pair of tusks on each side of a single trunk, as in reality.  There is but one tusk (click image below) carved in bas relief against the outside of one of the trunks.  This portrayal suggests a touch of ironically expressed impressionism  : an example of artistic license unlocking ingenious creativity.

A magnificent and unmatchable work of art in yet another dimension is this object encompassing the most beautiful kaleidoscope of burial saturant colors in all their earth tones of rust red, muted vermillion, and shades of ochre on a background of mutton fat to lychee white nephrite.  This serendipitous,  natural yet un-natural, palette is what first captured this collector/writer when he saw archaic jades for the first time in the early ’70s.   Returning to form and carving, this vessel features the epitome of full relief sculptural representation in the serpentinely twisting bodies of felines on the surface of the cylindrical body of the vessel.  They are arrested in a moment of exuberant writhing , twisting, coiling and recoiling; their bodies ready to spring and swipe and tear with claws unsheathed and fangs bared.

Zhao Mo ruled from 137 BC to 122 BC, and his tomb was discovered in downtown Guangzhou in 1983.
Jade Rhyton from the Tomb of the King of Nanyue, Xianggangshan, Guangzhou, Guangdong Province
202 BC-9 AD

This is the most celebrated jade rhyton in China.  The white, translucent nephrite jade appears to be from the same Hetien source as the Edwards&Bishop piece; even the rust and reddish colors from burial saturants are strikingly similar.  The Nanyue rhyton, however, is smaller and lacks the vividly animated feline dragons in full relief.  And although the split and curving bifurcation of the bottom is similar, the Nanyue piece lacks the remarkable and unique elephant eye and tusk stylization. 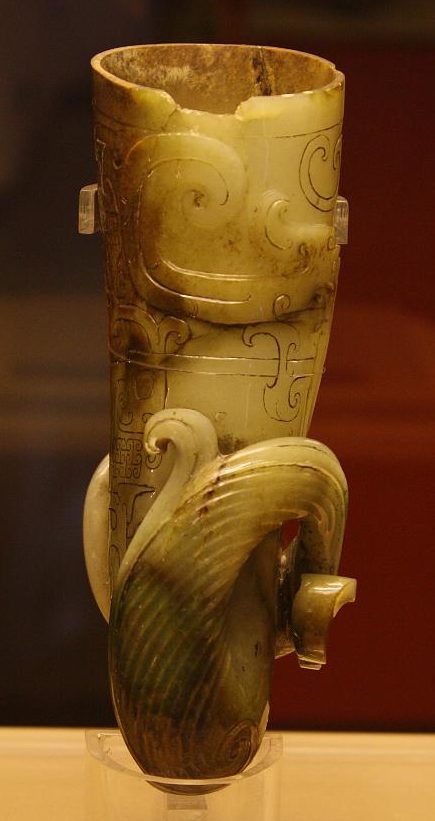 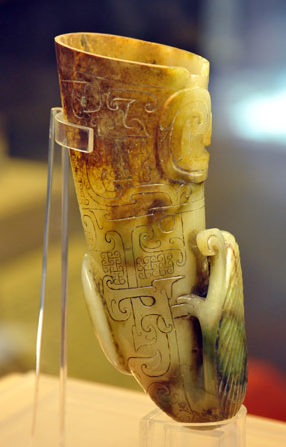 This rhyton below is, perhaps the most celebrated example outside of mainland China attributed to the Han dynasty.  It is in the National Palace Museum in Taipei.  Also referred to as a Horn-shaped Cup, it is  H. 18.1 cm; .3 cm less than the Nanyue rhyton above and almost 5 cm less in height than the one featured here in the Edwards & Bishop Collection. 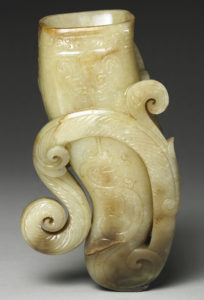 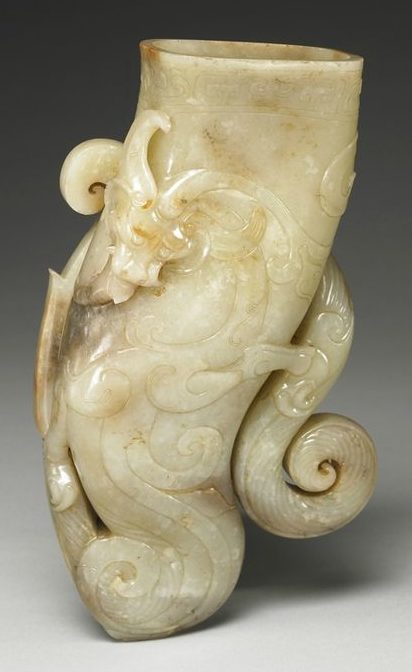 Not long after rhyta vessels reached China via Central Asia, the inevitable sinicization of style made imprint.  The protome or carving of horn form terminus was no longer the fore quarters of a realistic creature as with Hellenistic and Persian originals; they were replaced by Chinese creatures and stylization that continued to change from Han to Qing.  But suffice to say, by the time these W. Han rhyta, the protome with hole was gone and the surface decor was thoroughly sinicized as best reflected by the magnificent writhing felines in full relief on one and the head of the dragon creatures in full relief on the other (NPM, Taipei).   The document below shows a Parthian ‘true rhyton’ from the Metropolitan Museum, NYC, with animal protome with hole in chest for slow, ritual pouring for cleansing or imbibing as from a wine skin vessel.  The holes in the creature protome’s were usually in the mouth or in the chest.  The Chinese stopped using  protomes with holes, making it possible to pour from the mouth of the funnel shaped vessel only.  In 40 years of collecting we have only seen one Chinese jade vessel with rhyta function of pouring hole in the mouth of a protome creature and this vessel is not of horn body shape.  This vessel is now in this collection and may be seen in process of pouring function in the Rhyton Vessels category as Yi Cup ‘true’ Rhyton on this website.

There is one other, quite famous, that is of banded agate stone rather than jade.  It is described as having ‘gold inlay over the nose and this functions as a ‘plug’, which one would assume can be removed to reveal a pouring hole.   This unique vessel combing a decorative and presumably practical use of gold with a hardstone carving has nothing that would indicate Chinese influence whatsoever.  The ultra realism of the animal head, with horn form body of the vessel unadorned with scrolls or other decorative intaglio or relief carving of Chinese motifs –  plus the touch of gold as plug for the ‘true rhyton’ pouring hole points unequivocally to Parthian or Sassanian or other Persian cultural origin and certainly an import to Xian, China where it was uncovered.

Open document link below for the Metropolitan Museum’s Parthian Silver Rhyton discussed above.

After the archaic rhyta of Han, more hybrid Chinese-Central Asian ones most likely passed back and forth as gifts or tribute until the Song dynasty introduced purposeful archaistic renditions with monster heads carved in relief engorging the bottom of the horn shaped body of the vessel while continuing the high relief feline dragons on the body’s surface, often with one of the ‘dragons’ with head over the rim of the vessel’s mouth.

The rhyton vessels below are called ‘archaistic’ (fang-gu) in that they were motivated by the ancient or archaic l ones.  The emperor Qianlong encouraged this as honoring the past and Chinese tradition.  He called these fang-gu, and some archaistic pieces approximate the ancient in quality of stone and workmanship.  Most, however, are like the examples below,  which are not only smaller, but inferior in every way: stone, craftsmanship, and aesthetic conception.  The changes to the Central Asian rhyton under Chinese influence were at first to add apotropaic creatures, such as horned dragons, serpentine felines, and tao-tieh monster heads.  This included staining and degrading the jade to make it look ancient: antiquing of sorts, as exemplified by these.

With this piece, one can see that the detail of the monster head has been diminished and a more abstract head and mouth results; still, however with projecting horn type features that form 2 legs of a support tripod for the free standing capability that didn’t exist with archaic Chinese rhyta.

This rhyton was also sold by Christie’s as Song/Ming and their Essay, which gives a comparable published as early as 1948! … reads:  “Jade vessels of this type have been dated from the Song to the Ming dynasty and appear to be based on Han dynasty prototypes such as the jade rhyton from the tomb of the King of Nanyue at Canton illustrated by Jessica Rawson, Chinese Jade from the Neolithic to the Qing, The British Museum, 1995, p. 70, fig. 61. The bifurcated tail or mane seen on the Nanyue cup carried through into the later archaistic interpretations, which also included bands of archaistic scrolls and usually the addition of Han style chi dragons, as seen on the present rhyton. Compare the similar jade rhyton from the collection of Mr. H.F. Parfitt, included in the O.C.S. exhibition, Chinese Jades, London, 1948, pl. VII, no. 118, which was dated Song.”